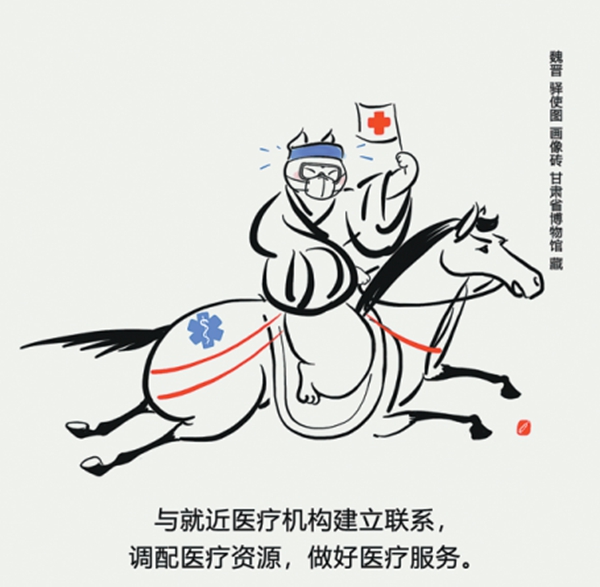 A museum photographer who works at the Terracotta Warriors' excavation site has created comics featuring ancient artifacts to remind the public of precautions during work resumption, as the COVID-19 outbreak comes under control in China.

Zhao Zhen has turned these relics into vivid and funny comics.

The photographer has created five series with about 60 panels in total, for instance depicting the history of facemasks and otherwise educating about hygiene and health precautions since late January, when the virus started to seize the country.

"Cultural relics are what I know best," says Zhao, who works at Emperor Qinshihuang's Mausoleum Site Museum in Xi'an.

"So, they just came to me naturally when I drew comics."

One of his works calls attention to medical-waste treatment using a bronze lamp from the Western Han Dynasty (206 BC-AD 24).

The original is a maiden holding a lamp connected to her long sleeve that heated perfumed water.

"This is our ancestor's contribution to respiration," Zhao says.

His rendition swaps the woman's face for a cat's. And the lantern contains medical waste like used facemasks to remind people to properly dispose of them.

Zhao also reimagined stone statues of China's legendary first emperor, Fuxi, and the goddess, Nyuwa, who created the world and animals in the first six days.

The actual sculptures are preserved at the Wu's Tomb Stone Carving Museum in Shandong province. Both figures hold a ruler and a compass, symbolizing the importance of aboveboard behavior.

Zhao replaced the ruler and compass with a thermometer and health certificate.

"Effective epidemic control results from our adherence to rules and discipline, which is our national character," he says.

The comic is meant to urge employees to continue to report their health conditions to administrators during work resumption.